Save
Share
Share
The building of the “Assumption of Virgin Mary” Church, initially a monastery, began in 1627 during the rule of Miron Barnovschi-Movilă, Prince of Moldavia.

This gentle and faithful leader has also founded monasteries in Bârnova (near Iași), Hangu (Neamț County), Dragomirna (Suceava County), Toporăuți (Toporițvi, Ukraine) and “St. John the Baptist” church in Iași, and finished the works on the Wallachian Church Uspieńska (Assumption of Virgin Mary) also called Stavropighia of Lvov (Ukraine). In 1633, he was called to Constantinople, where he was accused of betrayal due to the good connection he had with Poland. Sultan Murad IV forced him to convert to Islam if he wanted to live, and his denial led to his beheading.

Barnovschi Church was dedicated to Jerusalem’s Patriarchate, thus becoming the official residence of patriarchs from the Orthodox Orient passing through Moldavia. 19 patriarchs lived here, the most renowned being Dositei Notara (1669-1707), the Patriarch of Jerusalem, who worked mainly from Iași. In the monastery’s yard, cells, abbot houses, a Greek school and annexes for monks and guests were built, but they were destroyed throughout time, especially during the communist period. In the 1980s the systematization of the entire Civic Centre area was decided, which led to the demolition of all the annex buildings and the construction of blocks of flats very close to the church door, affecting the buildings’ resistance structure. A new front of buildings was desired along the newly created boulevard Anastasie Panu, to cover the shapes of Barnovschi and Bărboi churches. But the church and the steeple were saved through the intervention of the historic monuments specialists. The consolidation and restoration works lasted since 1994 to 2004. Near the tower we can also see the ruins of the former cells, and towards the block of flats we can notice an entrance gate to the basement of the former Father Superior’s house, built in 1786.

The church is remarkable for the open porch, built in the 18th century in Baroque style, leaned on six stone columns. The church has two towers, one above the nave, shaped as a prism with 12 sides and a braided frieze, and a second one above the closed porch, taller, also shaped as a prism, but with bevel cants. Both the façade, as well as the towers have small niches above and under the windows. Inside, the pronaos was initially separated by the nave through archways and columns which were demolished to enlarge the space in the church. The inside painting dates back to 1880, but it is highly damaged. From the initial frescoes since 1653, only the portrait of the founder and his mother still exists. The linden tree wood iconostasis dates back to 1788 and consists of several oval icons. On the upper part, in the middle, The Lord Jesus Christ is painted, and underneath, the Last Supper. The miracle worker icon “Saint Ann holding Virgin Mary” is of great value, dating since 1626. During the archaeological diggings in 1998, a brick vaulted crypt was discovered under the nave, which contained some bones, but without the skull. It is believed that it was the body of Prince Miron Barnovschi, brought back in secret from Constantinople and buried here.

The bell tower was built in the 17th century out of big blocks of stone and bricks, having two vaulted levels, a spiral stairway and a vault. In the tower, there are two big bells of 400, and 300 kg and a smaller one of 70 kg. The big bell was cast in 1628 in Lvov, in Ukraine. After removing the outer walls of the churchyard, the arched entrance through the tower was closed. 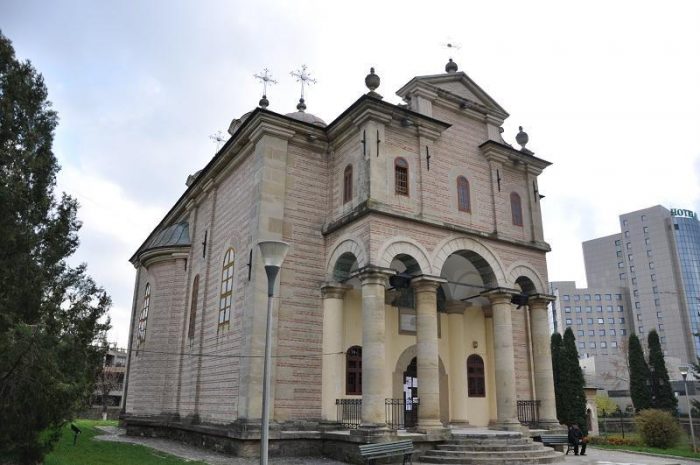