Save
Share
Share
From the Union Square, in the heart of the city, towards Târgu Cucu, once the soul of the Jewish community, our steps take us through the ancient “Golia Street”, today Cuza Vodă Street.

The imposing building with a dome in the Union Square, the Braunstein Palace, was built by the Jewish entrepreneur Adolf Braunstein in 1914, on the place of his former shops on the beginning of Cuza Vodă Street. The legend says that he wanted to own a more grand building than the Cuza Palace, today the Museum of Union. The building was initially a luxury hotel, afterwards a bank and then it hosted various shops. The Palace was bombarded in 1944, shaken by earthquakes and damaged throughout time. In the communist period, the upper floors served as social residence for the poor, while on the ground floor, the “Cupola” Art Galleries were installed, alongside CEC Bank and a magazine headquarters. Nearby, the visitors are captivated by the beauty of the Select Hotel. In 1865, the Jewish-Austrian banker Iacob Neuschotz became famous in the city for his involvement in charitable acts. Thus, out of belief and generosity and through his financial contribution, he erected the only reformed Jewish temple in the city, “Beth-Jacob”, near his house. Two years after its inauguration, in 1867, the temple was visited by the Prince of Romania, Carol I. The temple was destroyed by a bomb in 1944, and afterwards, demolished. The Select Hotel, also called the Neuschotz Palace, is remarkable through the eclectic French style, specific for the 1900s, with an anthropomorphic statuary group in front of the dome and with a richly adorned balcony.

In the past, the adjacent area of Cuza Vodă Street was dominated by the properties and palaces of the great aristocracy of Iași, such as the families Cantacuzino-Pașcanu (the current Marriage House), Balș-Sturza (the Post Office Palace), Cantacuzino (on the place of the Former Chamber of Commerce), Balș (the University of Arts), the family of Prince Grigore Ghica (the palace inside the Cuza-Vodă Maternity), Ghica-Calimachi (the palace near Golia Monastery), etc. After receiving the right of free trade on their properties in 1830, towards the street, narrow buildings linked to each other were constructed, with two or three levels and basements, which hosted various shops. The Jewish tradesmen opened numerous shoe and clothing shops, tailor shops or antique shops, and this spirit is still maintained nowadays. Some buildings near the Post still bear the elements of the Art Nouveau style, with various decorations: angel faces, alto reliefs of some deities, vegetal motifs or shells rolled as a document with the monogram of the owners, which show the ancient tradition of those tradesmen. In 1925, on the opposite side, the first wing of the Chamber of Commerce was built, in Neo-Romanian style, nowadays hosting insurance companies’ offices. After 1948, the remaining Jews (after the Pogrom), left their dwellings, so the communist regime took them and gave them with vulnerable persons, which led even more to the degradation of the buildings.

As in the past, a walk along the narrow street attracts the attention towards the wide opened windows, with exhibits arranged precisely to catch the eye of the passers-by.

The Romanian culture and the Jewish one have influenced each other in time. The lyrics of the Jewish anthem – Hatikva (Hope), initially called Tikvatenu (Our Hope), were composed in 1878 during Naftali Hertz Imber’s stay in Iași, a wonderer Jewish poet, born in Galicia. The anthem’s melody was composed in 1888 by Samuel Cohen from Ungheni (today, the Republic of Moldova), after the Moldavian folk song “Carul cu boi”.

Also, the melody of the anthem of Iași – “Iași, proud fortress”, is based on the Jewish folk song from Russia, “Tumbalalaika”. The Yiddish lyrics describe the story of an intelligent young man who was looking for a proper wife, inventing riddles in order to test her cleverness. 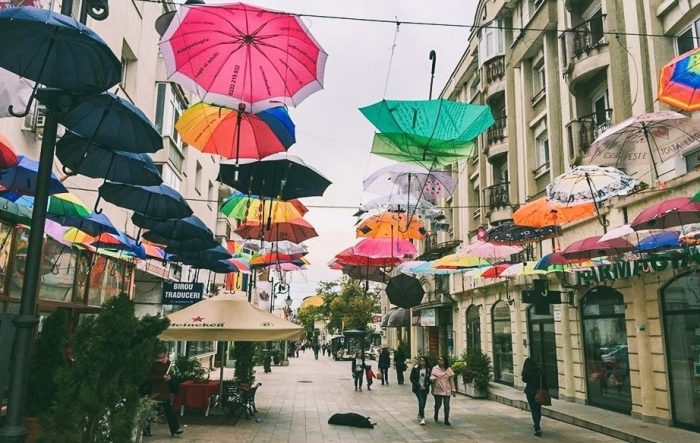